Rosendale Councilwoman Jen Metzger announced Thursday that she may challenge Republican Sen. John Bonacic for the Senate seat he has held for the last 19 years.

Metzger, a Democrat elected to a second term on the Rosendale Town Board in November, created a campaign committee to run for the 42nd Senate District on Wednesday, and said in her press release that she’ll make a formal announcement about her candidacy in March. She said she’s a 53-year-old mother of three who has lived in Rosendale for 17 years, has a PhD in political science from Rutgers University in New Jersey, and is director of the nonprofit Citizens for Local Power.

“The State Senate is not supposed to be a lifelong occupation,” Metzger said. “We need people in office with a fresh perspective, an understanding of our communities’ needs, and the energy and principled commitment it takes to meaningfully improve the quality of life of the people in our district.”

The 42nd District takes in parts of Orange, Ulster and Delaware counties and all of Sullivan. Bonacic, 75, who lives in Mount Hope and is a former Orange County legislator and state assemblyman, has had no opponent or won by huge margins in every Senate election since his first in 1998. He has almost $720,00 in his campaign account, the most by far of any of the 10 state lawmakers representing Orange, Ulster and Sullivan counties.

Governor Andrew M. Cuomo today announced a 30-day budget amendment will be advanced to fund voting reforms, including early voting across the state. This action will provide approximately $7 million in the FY 2019 Executive Budget for New York counties to offer early voting in the 12 days leading up to Election Day.

"Voting is the cornerstone of our democracy, and no one should have to choose between exercising their sacred right to vote and going to work, school or personal commitments," Governor Cuomo said. "By offering early voting across the state, we are further breaking down barriers to democracy and helping to ensure that all New Yorkers' voices are heard."

To make it easier for New Yorkers to vote, Governor Cuomo is advancing legislation to institute early voting in the State. The legislation will require every county to offer residents access to at least one early voting poll site during the 12 days leading up to Election Day. Voters will have at least eight hours on weekdays and five hours on weekends to cast early ballots. Counties must have one early voting poll site for every 50,000 residents and the bipartisan County Boards of Elections will determine the specific location of early voting polling places, subject to standards of accessibility and convenience.

SYRACUSE, N.Y. -- Are you an American Citizen?

That's what a border patrol agent asked Corey El, 27, of Brooklyn as he traveled to his parents' home in Niagara Falls on an Amtrak train that was stopped Thursday in Syracuse.

The border patrol officer moved on, bypassing some people and asking other people the same question: Are you an American citizen?

The checks were captured on a video by El which he posted on Twitter Thursday afternoon. By Friday the video had more than 625,000 views, 5,100 likes and 1,300 comments.

These types of checks by border patrol agents, which experts say are legal under federal law, are happening more often and are sometimes captured by passengers on their cell phones.

Last month a similar encounter with Florida border patrol agents on a Greyhound bus gained national attention after a woman was detained in Fort Lauderdale. The woman had an expired tourist visa and was arrested, according to the Miami Herald.

"There are several videos just like this on Twitter," said Syracuse University Associate Professor Elizabeth Cohen, who teaches political science at the Maxwell School of Citizenship and Public Affairs.

OPIOID FACTORY PROVIDES JOBS, BUT AT WHAT COST?

Mallinckrodt's generic oxycodone has become so prevalent in Florida that some folks ask for it by name.

The Mallinckrodt pharmaceutical factory is the largest employer in Hobart, New York. It was also the source of millions of generic oxycodone pills that federal investigators say fueled the narcotics epidemic. A rural community grapples with the supply-side of the United States' problem with pills.

This article appeared originally in 100 Days in Appalachia, a Daily Yonder publishing partner.

The small community of Hobart, New York, is a village divided.

The West Branch of the Delaware River splits it in two — Main Street along the north, and the “industrial district” of Railroad Avenue trailing along to the south. Between the historic Main Street storefronts, you can catch a glimpse of the Mallinckrodt plant, where generic oxycodone tablets are produced in massive quantities.

The pill factory employs hundreds of people, more than Hobart’s population of 441. The factory is easily overlooked and ignored by those in the village, but, to some, its presence there is troubling. Some in the area are thankful for the jobs the pill factory provides — but others worry that a plant that manufactures oxycodone is more curse than blessing.

Waiting for the other shoe to drop

Hobart sits in the town of Stamford, on the northeast border of Delaware County, the fifth most rural of New York’s 62 counties. A Community Health Survey conducted in 2016 showed that the county contains a higher proportion of low-income earners than either the state or the nation.

“We’re struggling like all of the county,” town supervisor Mike Triolo notes. “Mallinckrodt — we’re glad it’s there, but everybody’s waiting for the other shoe to drop. If somebody offers them a better deal, they may not be averse to moving.”

Who and What is Reclaim NY?

What is Steve Bannon's and Robert and Rebekah Mercer's "Reclaim New York"? Who are they? What have they been doing? How are they trying to influence elections in New York State... and why? Tune in for an important, in-depth, 2-part series: WNYC - Monday and Tuesday on Morning Edition and All Things Considered. Also available at wnyc.org. Share this information fast and far! 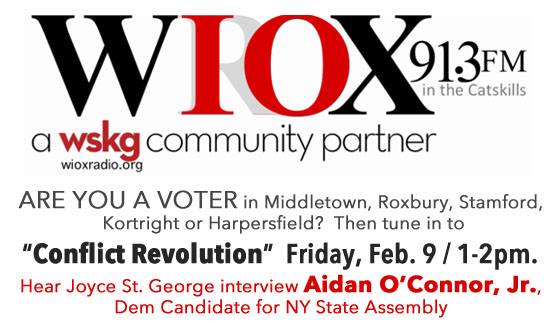 Aidan is running in a Special Election to be
held on April 24 to fill Pete Lopez's seat.
Hear him this Friday via radio or streaming
live on the web.

DURHAM, NY, FEBRUARY 5, 2018—Aidan O’Connor Jr., a fourth generation resident of Greene County and minority leader of the Greene County Legislature, announced his candidacy for the NYS 102nd Assembly District. O’Connor, a Democrat, intends to run in the anticipated special election for the seat.

“I’m running for Assembly because I love upstate New York and I have the energy, enthusiasm and experience needed to help make our communities the best they can be! Over the next few months I look forward to meeting everyone in this great district, I hope you’ll get to know me and I’ll hope you’ll give me the honor of serving you”

O’Connor grew up in Greene County and has worked throughout upstate New York for his entire career as a paramedic both for Greene County EMS and LifeNet of New York, an emergency medical service providing critical care by helicopter to 27 counties including all counties within the 102nd assembly district. He received his paramedic certification at SUNY Cobleskill where he teaches classes training the next generation of first responders.

He was elected to the Greene County legislature in 2015 representing Durham and now serves as chairman of the Health Services Committee and member of the Country Resources and Economic Development & Tourism Committees. O’Connor now works for LifeNet of New York as a Regional Business Development Manager, bringing his leadership and business skills to the company where he once provided critical-care medicine by helicopter.

During his tenure in the legislature, O’Connor has developed a reputation as a ‘work across the aisle’ legislator best known for his solution oriented approach to critical issues affecting his constituents.

A campaign headquarters is slated to open on February 12 in Catskill. For additional details go to www.AidanForAssembly.com

The national Democratic Party and campaign committees have their eyes on the Empire State as several Democrats seek the nomination to challenge U.S. Rep. John Faso, R-19, who is up for re-election this year.

New York Congressional District 19 has been represented by Republicans for the last eight years, but several Democrats are striving to take the seat back.

The last Democrat to hold the seat was John Hall from 2007 to 2011. Before his election, Hall, who is from Ulster County, was best known as the lead singer of the pop group Orleans.

Six Democrats are vying for the chance to challenge Faso in November.

The national parties and campaign committees recognize the district is a toss up — for Republicans it could be a threat to their 238-193 majority in the House of Representatives, and for Democrats it’s an opportunity to balance power in a federal government dominated by a single party.

“We know NY-19 is a toss-up district. The district has voted for Democrats in the past,” said Evan Lukaske, spokesman for the Democratic National Campaign Committee. “We have so many challengers looking to run against Faso, which is not normal compared to the rest of the country. I think people are ready for a change.”

The six candidates seeking the Democratic nomination include Brian Flynn, of Hunter; Gareth Rhodes, of Kerhonkson; Patrick Ryan, of Gardiner; Jeff Beals, of Woodstock; David Clegg, of Woodstock; and Antonio Delgado, of Rhinebeck.

“Large primaries are good things because, traditionally, any resources candidates gather go to whoever wins the primary so they will be ready to take the fight to Faso,” Lukaske said.

Gov. Phil Murphy spoke of the importance of making New Jersey a leader in alternative energy before signing an executive order to return the state to national leadership in offshore wind energy. Wednesday, January 31

PHILLIPSBURG — Gov. Phil Murphy has announced he will join the governors of Pennsylvania, New York and Delaware to support a ban on fracking in the 3,000-square-mile Delaware River watershed.

Murphy called fracking "one of modern times' most damaging threats." Its use of chemicals, and their ability to pollute water systems, puts at risk the health and safety of people and the economic life of Delaware River towns, he said.

It was the latest of several environmental actions Murphy took last week.

Each county outside of New York City was instructed to empower a panel to prepare a plan for sharing responsibilities among local governments contained within that county. Officials were told their plans must demonstrate new recurring property tax savings by eliminating or consolidating duplicative local government services, and they were instructed to hold a minimum of three public hearings.

Albany County Executive Dan McCoy has held one public hearing before the August 1st deadline, with two scheduled to be held later this month.   "We want people's input. We've met with BOCES, we met with all the elected officials in a variety of unions to discuss how we can do something working together. We were mandated by the state of New York, I do say it is an unfunded mandate. We are mandated by the state to produce this record by September 15th and have it certified."

Shared services savings for Albany County have been pegged at $6.8 million. The draft plan includes merging the city of Albany’s records clerk positions with the county and consolidating 9-1-1 services.   "We had a short window to keep it movin.' And then when the other argument is 'who certifies it?' Who certifies what the tax break is to every homeowner and business owner in that county? The logistics were just a lot but it has brought up great dialogue. We've talked about stuff that we've consolidated over the few years, the last couple years. And what we continue to work on going forward."