Pretty much everyone who buys a home in New York is braced for sticker shock, but hardly anyone is ready for the pain of little cuts called “closing costs.”

One of the deepest of these is title insurance, which guarantees that a property can change hands without anyone else having a valid claim against it.

Shopping for this kind of insurance is almost futile. A cartel sets the price. Nearly all of the 30 title insurance companies that do business in New York charge the exact same rate. It is the highest in the country, 40 percent more than neighboring Connecticut, and 25 percent more than New Jersey.

Stephanie Miner Rules Out Bid for Congress, but May Yet Challenge Cuomo

During her tenure as mayor of Syracuse, Stephanie Miner garnered attention for her willingness to criticize Gov. Andrew Cuomo, a fellow Democrat.  Nathaniel Brooks for The New York Times

Stephanie Miner, the former Democratic mayor of Syracuse, announced Thursday that she would not challenge a Republican congressman in her Central New York district, but instead was seriously considering a run for governor.

To date, no major candidate has stepped forward from either party to oppose Gov. Andrew M. Cuomo this fall, and Ms. Miner’s public ruminations about such a challenge are sure to rankle state Democratic Party officials.

“I’m still seriously considering it,” Ms. Miner said about a campaign for governor.

In 2014, a relatively unknown candidate, Zephyr Teachout, a law professor, took on Mr. Cuomo and garnered a surprising 34 percent of the vote in the Democratic primary.

The state of New York became the second state to put itself on a collision course with federal officials as its governor, Andrew M. Cuomo, signed an executive order Wednesday designed to flout the Federal Communications Commission's recent decision to repeal its net neutrality rules.

The order escalates a deeply polarized battle over the future of the Web and highlights the role states play as they seek to respond to major deregulatory decisions coming out of Washington.

Cuomo's order comes two days after Montana's governor, Steve Bullock, signed his own executive order in a bid to circumvent the FCC.

WOODSTOCK, N.Y. >> The second annual Women’s March brought out hundreds of people Saturday afternoon, not just to protest on behalf of women’s rights, but also to shed light on other social justice issues.

“Everything brings me out today,” Alan Finger of Ghent said as he waited for the march to begin. Holding a sign depicting President Donald Trump sitting on a wall with the caption of “Trumpty Dumpty,” he said he saw the Woodstock event as a “resistance march” and not just about women’s rights.

As 2017 has drawn to a close, we see the opportunity for a Democratic sweep from Congress to the Senate to our NYS leadership statewide and in both Legislative Houses. The very large number of candidates for our endorsements for Congress testify to the perceived shakiness of the Trump regime and the Republicans. His cynical trumpeting (no pun intended) of his concern for the middle class is belied by his actions benefiting the few AT the expense of the many. We need to build up our forces from the local level to beat back this wave of demagoguery and we are doing just that.

Jake Rosa (third from left), died early this morning in a tragic accident in the town of Margaretville. Pictured is Rosa and additional potential Middletown candidates during a Republican Forum which took place at the end of October. Rosa was voted into his third term as a board member for the town of Middletown in November.

The Delaware County Sheriff’s Department is investigating the fatal accident which took place on Bill Stahl Road in the town of Margaretville.

Investigation into the accident revealed that the Arkville resident was on a disabled tractor that was being towed by a landowner along a narrow, snow covered driveway, when a wheel of the tractor dropped off the driveway adjacent to a steep embankment and overturned, fatally injuring Rosa.

The tractor, which was not running at the time of the accident, was not equipped with tire chains or a rollover protection structure, according to a release from the sheriff’s department.

In November, Rosa was voted in for his third term as a board member for the town of Middletown.

Rosa, 42, was self employed as a logger and also operated a small farm.  He is married with a grown step daughter.

“One of the best things about this county and town is the open space and I love that the current board works so well together.  When we walk in the door - we leave politics at the door, whether you are a Republican or a Democrat,” Rosa said in a November interview with The Reporter.  “I enjoy working for the people - my experience on the board has been pretty great.” 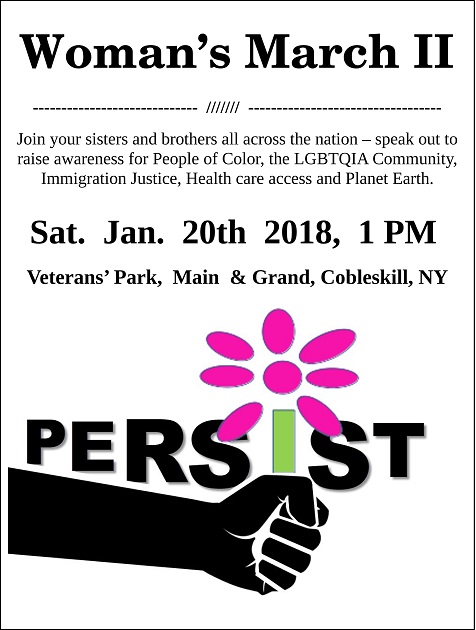 Start fighting for your voice locally. Our County Board of Supervisors does not let the public speak at its board meetings. Link to and sign a petition to help change that! Share with your friends. Do it before Dec 15! http://bit.ly/delcospeaks

Listen To Us: Petition to allow citizens to speak at regular Delaware County (NY) Board of Supervisor Meeting

The Delaware County New York Board of Supervisors does not let the public speak at its board meetings. We, the undersigned, request that the Supervisors remedy this situation by granting the public `Privilege of the Floor` and allow citizens to speak and voice their concerns at regular board meetings.